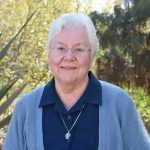 Sr. Margaret Keaveney, D.C. is the past President and Chief Executive Officer of St. Vincent’s. As a Daughter of Charity, Sr. Margaret has spent her life’s work supporting the needs of the disenfranchised and often forgotten in our midst.  St. Vincent’s is proud to share that because of this dedication; Sr. Margaret is a recipient of the Pro Eccelesia et Pontifice Medalfrom Pope Benedict.  This medal is known as the “Declaration of Honor or Cross of Honor” conferred by the Pope on lay women and men, or members of the clergy for exemplary service to the Roman Catholic Church.

As the past President and Chief Executive Officer, along with the support of the Daughters of Charity, Sr. Margaret led the strategic planning effort that resulted in the development of 75-tax credit financed apartments for low-income families and 95 HUD-202 apartments for low-income seniors in Santa Barbara. In addition, she led the marketing and branding efforts for St. Vincent’s in 2012, which re-defined the oldest not-for-profit organization in Santa Barbara.

Advocating for creative solutions to complex issues, Sr. Margaret brings that same tireless energy to her latest role in 2017 as the Assistant to President for Mission, Outreach and Archives. In this capacity, Sr. Margaret advocates for not only the vulnerable populations served by St. Vincent’s; but all those in the greater community. Sr. Margaret has the unique ability to engage decision makers to define the barriers and stigma that many individuals face gaining access to services and to find ways to remove them. These talents make Sr. Margaret a sought after resource both in Santa Barbara and beyond.

In 2017, Sr. Margaret has launched a new effort, St. Vincent’s Heart–Aging Well Program, designed to strengthen the physical, emotional and spiritual well-being of residents through interactive and engaging classes. Sr. Margaret is also researching and archiving the history of the Daughters of Charity in Santa Barbara from their arrival in 1858 to the present day.

When not serving the residents, Associates and visitors on the campus of St. Vincent’s, you may find Sr. Margaret globetrotting—having visited Daughter of Charity Ministries on six continents around the world.